EBITDA is a sinful performance metric

Expected market opportunities were plentiful. Catchmark timber trust (NYSE:CTT) anticipated a supply-demand imbalance in wood products that would increase the price of timber and timberlands. The increase in demand was due to a growing housing market. The reduction in supply was due to an infestation of timber in British Columbia.  Catchmark also reported that policymakers in Canada increased red tape on local producers because of environmental, social and political factors, which would allow the Georgia-based REIT to bridge the gap. 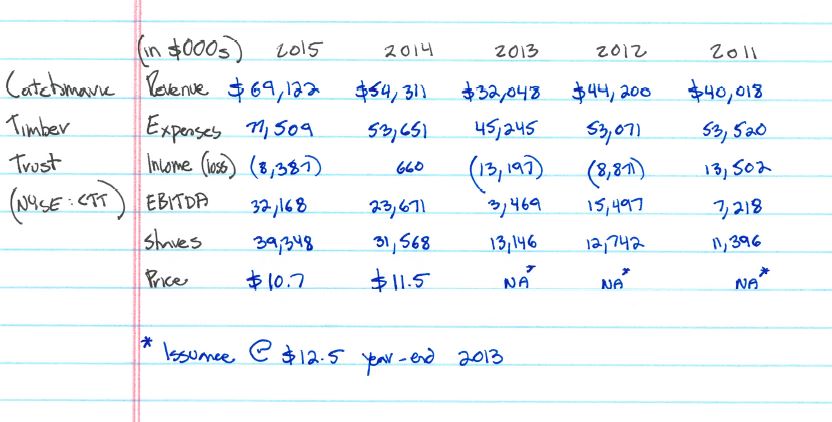 Because operating cash flow did not cover investing cash flow, management had to issue equity and debt. Management had increased the number of shares outstanding by twofold. At the time of the IPO, there were 13 million outstanding shares. By the end of 2015, there were over 39 million. During this time, Catchmark market value declined by over 10 percent, from an IPO share price of $13.5 to a share value of $11.5 at the end of 2015.

Perhaps overreliance on EBITDA as a performance metric was to blame. A prospectus holder in 2013 would observe that Catchmark EBITDA grew by 50 percent in two years, from $10 million in 2010 to over $15 million in 2012. And EBITDA growth continued in the years after. In 2015, EBITDA was over $32 million.

Shareholders soon learned of depletion, logging costs and hefty operating expenses, excluded from the EBITDA calculation. Depletion costs are  attributed to timber harvested. Similar in concept to depreciation expense, depletion is charged against income as trees are harvested. Depletion rates are determined annually by dividing the sum of net carrying value of the timber by the total timber volume estimated to be available over the harvest cycle. The investment lifecycle is 30 years, notes Thomas Brickman of Cyprus Partners, a brokerage company. Logging and hauling costs relate to felling and bucking, including the preparation of logs for movement. Taken together, the depletion and logging costs represent 60 percent of Catchmark operating costs.

In short, Catchmark had grown EBITDA by fourfold in past five years, but its share value declined. The timber business requires substantial capital expenditures and depletion and logging expenses are real costs. Including the costs in the valuation of the timber REITs often results in an intrinsic value lower than market value. Caveat emptor!