When a property acquisition frenzy is ill timed

Universal Health Care Realty Income (NYSE:UHT) was busy in the past nine months as it over tripled its real estate portfolio holdings. A year ago, Universal owned 62 properties, consisting of 49 medical office buildings, 6 hospitals, 3 emergency departments and 4 preschool and childcare centers. As of September 30, 2016, Universal had investments of about $3.5 billion in 202 properties in 29 states, totaling 14.5 million square feet.

Was this poor timing? Capital markets are wary of two future pitfalls, given the new presidency in United States. First, Congress may attempt to repeal or modify various provisions of the Patient Protection and Affordable Care Act. Second, the Budget Control Act of 2011, enacted to reduce fraud and abuse under the Medicare program, may result in a decrease in Medicare programs’ spending. Rents and occupancy rates are dependent on these trends.

The looming risk was barely visible in the beginning of 2016. Universal’s peer companies, such as HCP, INC, Omega Healthcare Investors, Healthcare Realty Trust, National Health Investors and LTC Properties, traded at 2.80 times to book value in the preceding two years. And the high valuation was not unwarranted. The peer group average return on equity was 30 percent, while modestly leveraging their balance sheets, as funds from operations were fourfold the interest expense. The ratio between debt-to-asset ratio was 50%.

Yet Universal operational results did not match the hype. The company’s funds from operations per share, net operating income per share and return on average equity declined in the last five years, while leverage and debt to asset ratio has increased. Unsurprisingly, perhaps, interest coverage ratio declined as well. Yet capital market remained oblivious - Universal share price climbed by twofold during this time. Its shares now trade over two times net asset value. 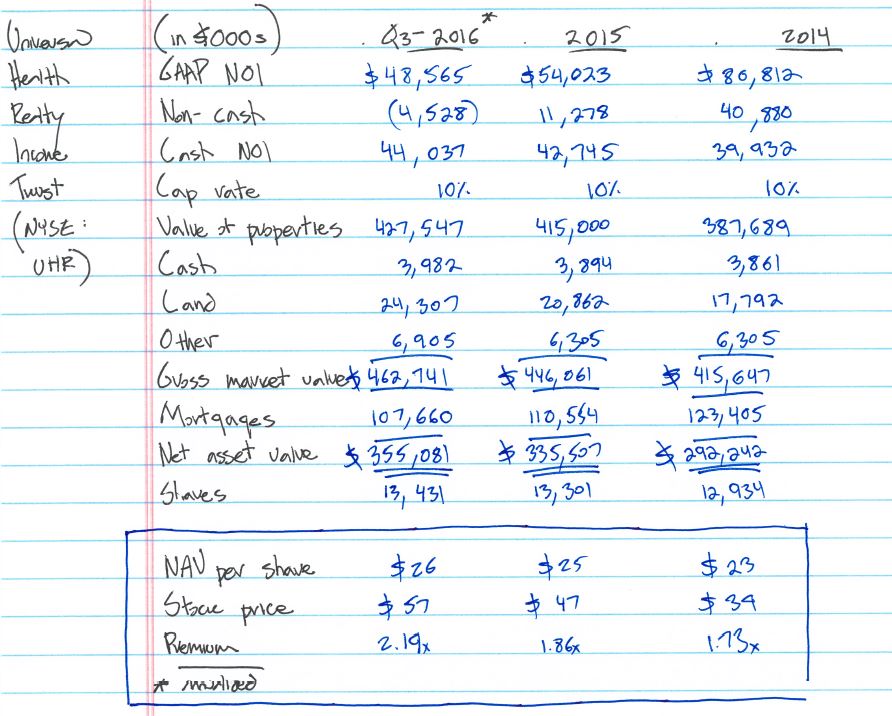 What goes up does not always come down. First, Universal may acquire a competitor, such as Care Trust REIT or Community Healthcare Trust. And an accretive purchase may prolong a revaluation. Second, capital markets may increase medical office buildings valuation with the new appointed presidency committed to abolish red tape and regulation. Third, since 2012, Universal had traded at a premium of over 1.70 times the net asset value. In this light, perhaps, a twofold premium does not seem dear.

When asked how his company handles patients who cannot pay their bills, Alan B. Miller, boss of Universal replied: “I think that companies like ourselves are trying to do what we can to reduce the bad debt…We’re trying to work through the emergency rooms, where people who are not true emergencies will not necessarily be treated.” But as it turned out it was due to a policy that requires patients to have insurance that helped to reduce the expense. Should the policy disappear, it absence will not go unnoticed.