“As we reach for our goal of producing a mass market electric car in approximately three years, we have an opportunity to leverage our projected demand for lithium ion batteries,” noted Elon Musk, boss of Tesla, a car manufacturer. “We are planning to build a large scale factory that will allow us to achieve economies of scale”. Banking on that was Jack Rowe, owner of an empty, 183,435 square foot industrial building located in Sparks, Nevada.

Recently put on the market for sale, the industrial building has been standing empty for three years. Jack estimates that once Tesla completes the construction of Gigafactory, estimated at a cost of $2 billion, an increase in demand for industrial space will follow. According to Jack: “Market rents will increase by a minimum of 40 percent, from $0.35 PSF to $0.50 monthly triple net lease rate.” All else equal, a higher NOI translates into a higher valuation.

The parties settled on four NOI scenarios. First, Tesla factory will indirectly add demand for industrial properties in Nevada. With a probability of 15 percent, market rents will be $0.50. Second, Tesla will have a strong bargaining purchasing power, which will deter entrants. With a probably of 45%, market rent will remain at $0.35. Third, states such as California and Arizona will offer higher tax incentives. And with a probability of 24 percent, rents will decline to $0.30. Fourth, with a 16 percent chance, due to an unforeseen event, market rents will remain unchanged but the building owner will obtain rents of $0.20 NNN PSF. 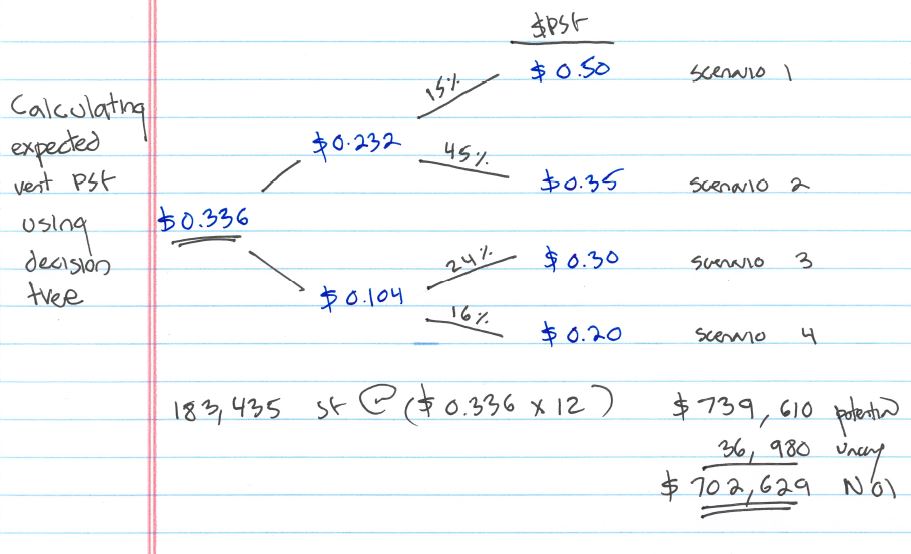 A valuation of $10 million was settled. The tree decision Net Operating Income was rounded to $703,000 at a capitalization rate of 7 percent. In the field of psychology, pre-mortem reflection is one way to reduce stress, reckons Daniel Levitin, a neuroscientist. Using a decision tree showed similar results.