When the accounting convention underweighs earnings and overweighs assets

“Patience is a virtue” is what the late Nathan Most likely said when rejected by John Bogle, then boss of Vanguard. He was right. The idea of an exchange-traded fund (ETF) turned out to be one of the greatest financial innovations in the past two decades. Conceived from a theoretical idea in the nineties, there are now over 1,600 ETFs listed in the United States alone, with over $1.8 trillion in assets under management. As the evolution of ETFs demonstrates, there is often a lag in time between a concept and its acceptance.

It is often the case in real estate too. Take Independence Realty Trust (NYSE: IRT) as an illustration. The company owned 50 residential buildings, or 14,000 units as of 2015. Yet it reported a pittance of $98 million of rental income and $59 million of Net Operating Income. A back of the envelope calculation would result in a monthly rent of $583. But the company reported an average monthly rent of $950 per month.

Why the difference? Management may provide tenants rent concessions which defer rental income to future dates. Or the overall portfolio of properties occupancy rates may be low. And a vacant unit generates zero income. But in the case of Independence, the difference lies in the timing of its acquisitions. In September 2015 the company increased its real estate portfolio holdings by 50%. But with less than three months of earnings, the company had to realize the full value of the real estate on its balance sheet.

There is a gap between what is booked and what is earned. And in the case of Independent, the gap is meaningful. If Independent generated $86 million in NOI, or $1.72 in NOI per share, its share price may increase by twofold. Its peer group, composed of residential REITs, such as Apartment Investment and Management Company, Preferred Apartment Community, and Monogram Residential Trust, traded at an average of 9.3% capitalization rate over the past three years, while Independence traded at a 17.0% capitalization rate at the end of 2015. 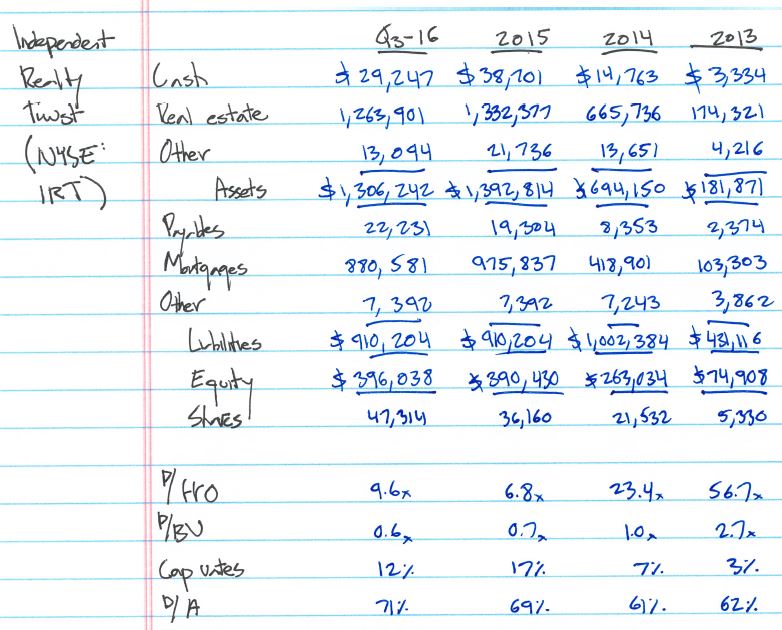 Yet risks are plentiful. First, Independence increased its floating-rate indentures by tenfold in 2015. The company carried $430 million of floating-rate loans, while in the previous year it carried $38 million of floating rate notes. Second, due to management’s lackluster performance, a wholly owned subsidy of Jupiter Realty, a Chicago-based real estate firm, acquired control over the operations of the portfolio properties. Third, management lacks skin in the game: it owned a mere 0.5% of outstanding shares.

Returning to John Bogle, a passionate advocate against the ETF industry, perhaps, his conviction against the industry was timely. Admittedly, whether ETFs would be attractive to investors was never the issue. He would argue that ETFs catalyze excessive trading, which results in high transaction costs; that their reliance on macro events is speculative in nature; and that ETFs invest in opaque investments (to understand the performance attribution of Proshares Vix Short-Term Futures ETF, for example, is a masochistic endeavor). Yet do their benefits outweigh their costs over the long term? that - alongside the valuation of Independence - only time will tell.■