Why do over 8,000 people, including institutional investors, financial advisors, and fund managers subscribe to weekly articles from Noam? Find out here:

Go beyond the headlines to master your understanding of financial markets. Get interviews with top fund managers, in-depth analysis of companies, and exclusive content.

Thanks for joining! You'll hear from us soon.
Oops! Something went wrong while submitting the form.

Colony Starwood Homes (NYSE:STR) is one of the largest single-family REITs. It operates in two lines of business. First, the company acquires, renovates and leases homes to qualified residents. Second, the company acquires troubled loans secured by real estate and strives to obtain ownership via foreclosure or other resolution process.

Its massive residential real estate portfolio is unprecedented. The company owns 12,300 homes with an average size of 1,764 square feet of which 91 percent are leased. South Florida, Atlanta and Houston represent 50 percent of its geographic exposure. Its average investment per home is $162,000 and average annual rent income is $18,000 per home. With a 40 percent expense ratio, capitalization rate is above 6 percent.

Colony's loan portfolio includes 2,500 loans purchased at $372 million with a UPB of $567 million. It purchased the portfolio at a 35 percent discount. Based on broker surveys, the purchase price to current value is 64 percent. Florida, Illinois and California represent 85 percent of the loan portfolio.

Yet asset base growth was not organic. On September 2015, Colony American Homes (CAH) and Starwood Waypoint Residential (SWAY) merged into a mighty company. Prior to the merger, CAH owned $3.3 billion in real estate and SWAY owned $2.3 billion in real estate. CAH shareholders received $1.68 billion of equity, 38 million shares valued at $26 a share, by giving away $1.69 billion of equity in CAH. Based on Net Asset Value, CAH shareholders traded pieces of paper at par with the hopes of a brighter future. 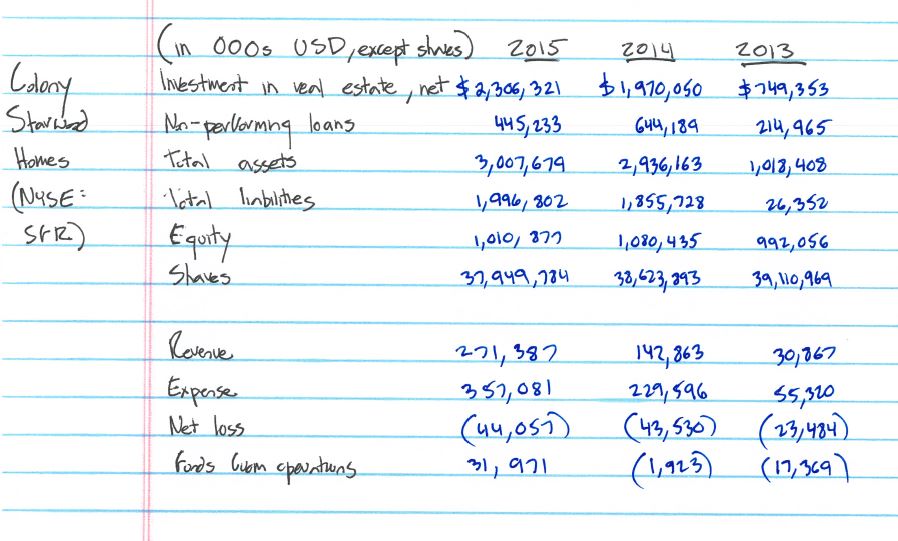 Yet management unveiled potential pitfalls. The merger would dilute the ownership percentage in the combined company. Risk associated with integrating new individuals into the management and the board would be apparent. And the combined company may not capture any of the anticipated synergies and cost savings. Bears may bulge, but the rewards triumphed the risks.

Colony Starwood homes trades at 20 percent premium to book value and shareholders rejoice over the hefty valuation. One possible explanation is the increase in Funds From Operations. The two separate companies lost a total of $0.44 FFO a share in 2013 while the combined company earned $0.84 FFO a share in 2015. Another explanation is that Colony started to pay dividends. Compared to zero dividend distribution in 2013, Colony distributed $0.66 a share in 2015. How the company will handle future growth will be the topic of a story that continues to unfold.