Rexford Industrial Realty (NYSE:REXR) attributes its competitive strength to a diversified tenant mix which reduces default risk and earnings volatility, and access to deal flow which allowed the industrial REIT to become one of the largest purchasers of industrial properties in Southern California. And its concentration on infill markets, described as high barrier to entry markets, was viewed favorably by investors. In evidence is a recent spike in market value. 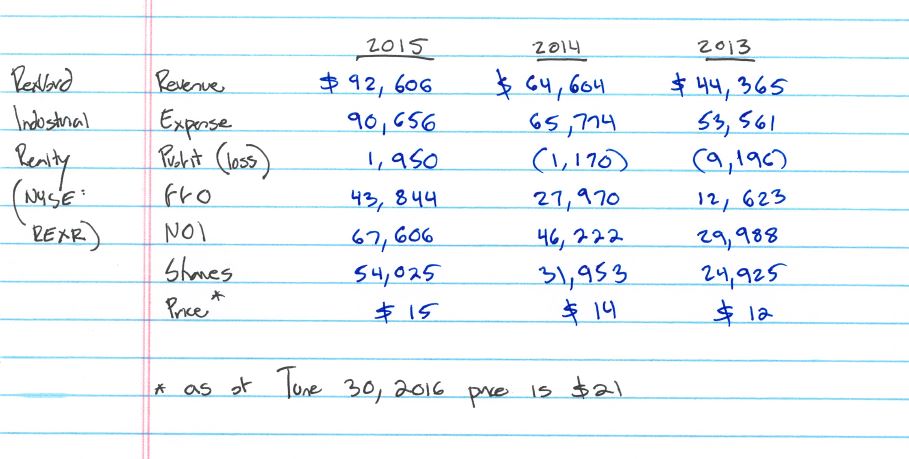 Yet industrial properties value does not increase much over time. Industrial properties are highly exposed to vicissitudes of the economy. And an industrial property typically has no more than a tenant or two. Compared to an apartment building with multiple tenants who pay rent, tenancy risk is higher. But because tenants are responsible for the operations of the property, the laissez faire management style is often appealing.

Another characteristic of an industrial property is the long-term nature of the lease. In theory, industrial leases expire in 10 to 15 years. But it is not the case for Rexford. Over 55 percent of its leases mature in three years. Out of the 1,285 leases, there are 1,006 leases that will expire in the next three years. While it can be viewed as an opportunity to increase lease rates, skeptics would argue differently by emphasizing the looming vacancy risk.

In short, Rexford management did all the right things. It purchased industrial properties sensibly while using a reasonable amount of debt. And its focus on Southern California has proven successful. Watched by the analysts and capital markets, its share price climbed to unattractive levels, which should now deter investors.