Simon Property Group (NYSE:SPG) owns and manages retail properties, primarily consisting of malls. As of December 31, 2015, the company held an interest in 209 income-producing properties. Malls and outlets represent over 85 percent of the asset type composition. Globally, the company invested in countries in Asia, such as Japan and Malaysia. And in Europe it acquired a 20.3 percent equity stake in Klepierre, a Paris-based real estate company that operates in 16 European countries.

The Klepierre purchase was a boon to shareholders. Shares were purchased for 28 euro per share. One year after acquisition, they traded at 31.25 euro. The first year total return, which included 1.45 euro per share dividend payments, resulted in a total return investment of 16.8 percent. The shares now trade at 42.5 euro. Including dividends and the increase in Klepierre’s share price, the company generated a nearly 40 percent return. 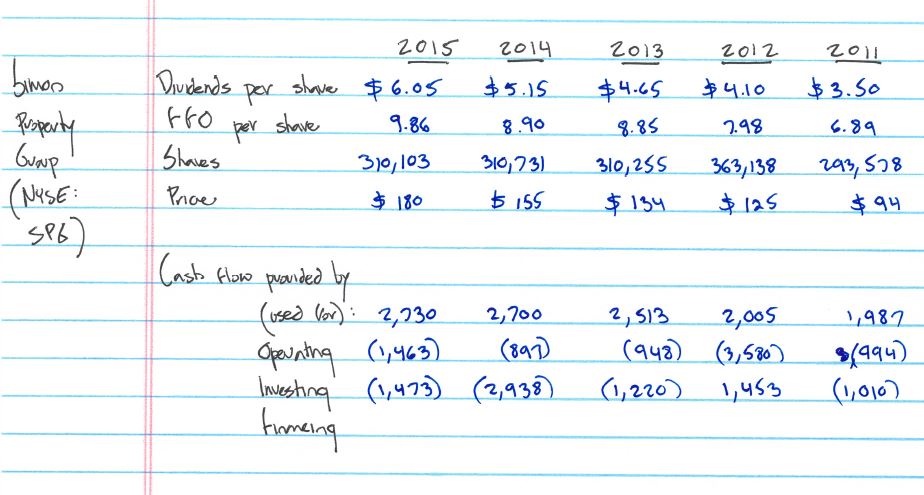 Yet there are risks. Credit rating agencies affect Simon's ability to fund its operations. By evaluating the operating performance, the agencies influence the amount of capital and the terms of financing. And because Simon primarily relies on debt financing to fund growth, an adverse change in credit rating could have an unfortunate effect.

And a plethora of debt burden may squeeze future profits. As of December 31, 2015, the company held a debt obligation of $22.5 billion. For every dollar of equity, the company held $5.87 asset which is considered a high leverage ratio for a mature REIT. With over $15 billion of debt due in five years, the company is subject to a refinancing risk. Mainly, a higher interest rate.

Is the main attraction a decent risk-adjusted dividend yield? On the surface, Simon's yield, at 3.1 percent, seems somewhat modest notes Sharif Abdou of Value Line, a research company. But factoring in the credit risk, it is a paltry return.  It is one thing to invest for principal safety; to earn a reasonable return is quite another story.