Simple but not easy

Disparate views about how to calculate the performance metric

Adjusted funds from operations (AFFO) is a commercial real estate company’s Funds from operations (FFO) after capital expenditures. AFFO portrays a better economic reality than FFO because it includes non-operating expenses. And in practice, dividend distribution by a REIT is dependent on earnings after the deduction of non-operating expenses. Alas, AFFO is key to understanding a dividend distribution policy.

National Association of Real Estate Investments Trusts (NAREIT) calculates AFFO by subtracting from FFO both normalized non-recurring and recurring expenditures that are not capitalized, but which are necessary to maintain its properties and its revenue. Recurring expenditures are new carpeting, leasing expenses and tenant improvement allowance

The trouble is that AFFO is often defined differently. Green Street Advisors, a REIT analysis company, determines AFFO by deducting from FFO normalized capital expenditure, straight line rent, gains on land sales, merchant-building gains and gains on debt prepayments. Other firms adjust FFO by items such as acquisition expenses, equity based compensation and costs that are unrelated to the operating performance of the real estate. 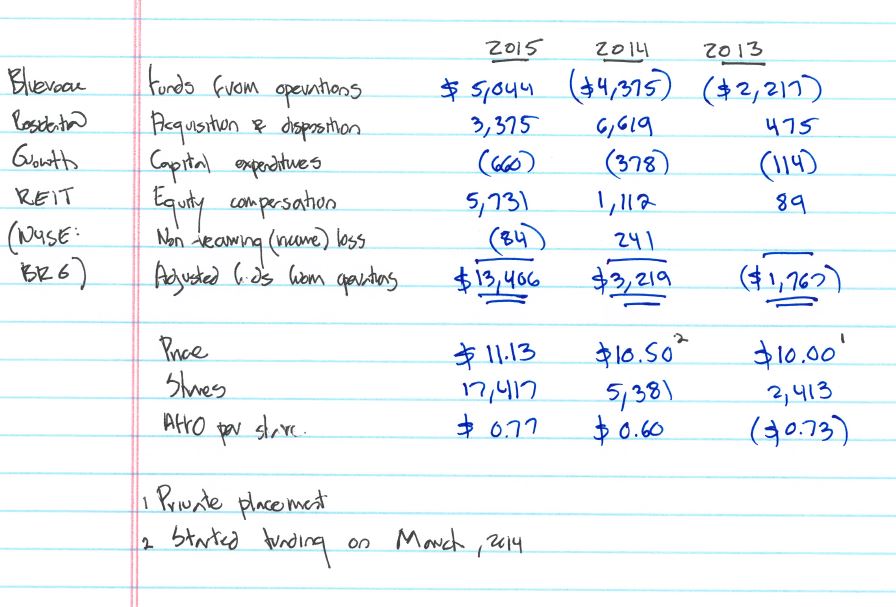 It is a murky situation because reported AFFO differs from one REIT to the other. As a result, AFFO is often incomparable across real estate companies, notes Ramin Kamfar, boss of Bluerock Residential Growth. Also, within the REIT itself, AFFO may fluctuate widely from one year to next. And because the year-over-year variance is substantial, it is often futile to compare AFFO over time. To project AFFO is even a tougher challenge.

AFFO multiple may underestimate a REIT’s market capitalization. For example, AFFO will not capture value from land or development projects, non-income producing assets. Also, the annual provisions required to maintain a property are difficult to predict, so AFFO often includes assumptions that can only be described as art rather than science.

Yet with all its drawbacks, AFFO provides benefits. First, it is widely used. Analysts at financial institutions often comment on AFFO trends. Second, by adding interest expense and other items to AFFO, it can be compared to EBITDA, a performance metric used by companies that operate outside of real estate. Third, a ratio such as AFFO to debt service allows rating agencies and credit analysts to estimate the expected solvency of a REIT.